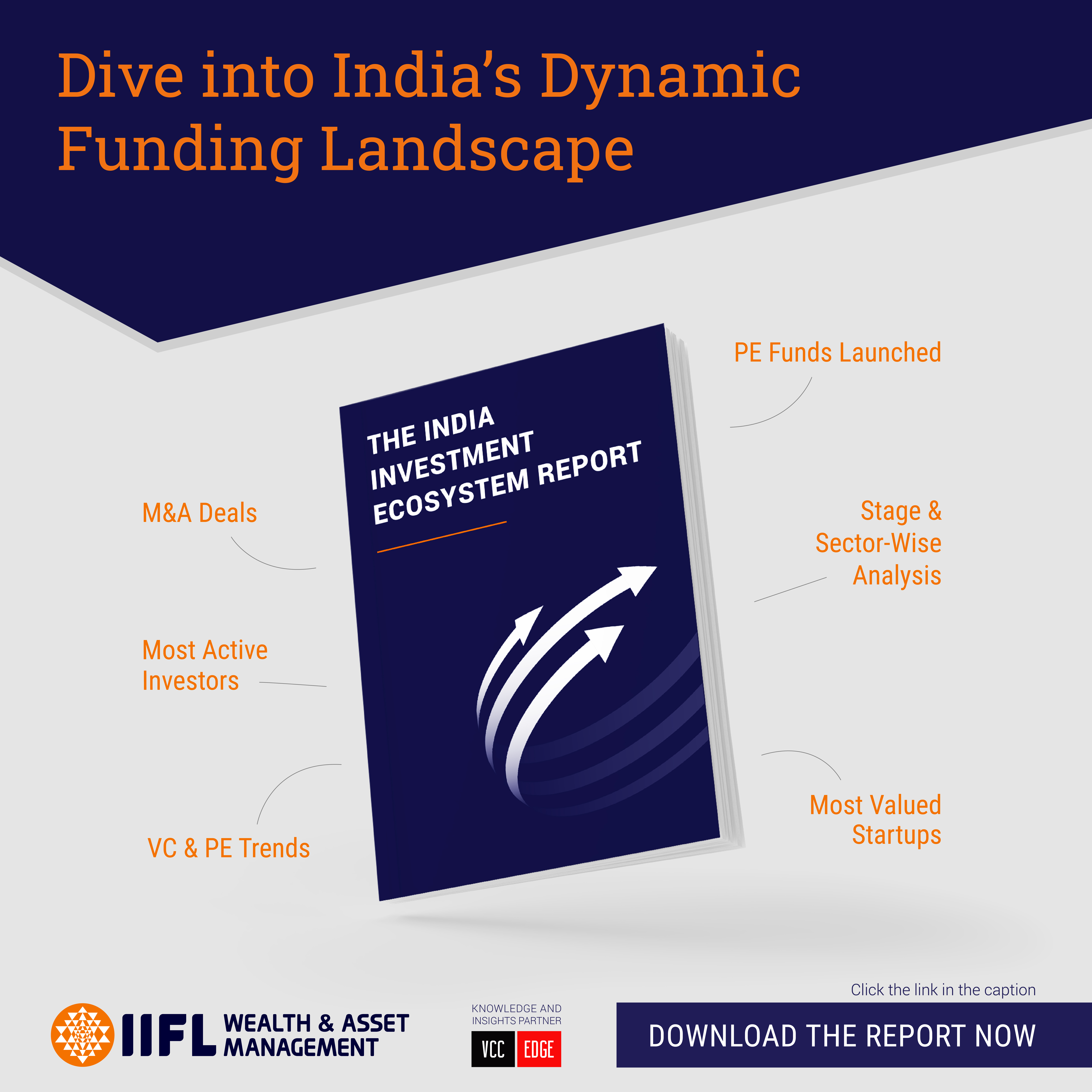 IIFL Wealth & Asset Management (IIFL WAM) in association with VCCEdge has launched the India Investment Ecosystem Report 2021. This report encapsulates an overview of private equity investments, funds and exits. It also highlights the mergers and acquisition deals conducted while mapping out the startup ecosystem and their contribution to PE investments.

The 2021 report on India Investment Ecosystem has identified various patterns of impact on the economy caused by the pandemic-defined year. While the Information technology (IT) and healthcare sectors scaled greater heights than pre-pandemic, the oil & gas and logistics sectors are not out of the woods yet. The big-ticket deals influenced a marginal uptick in private equity (PE) investments.

Key highlights are as follows:

The recurring themes across FY21 were digital marketplace technology meeting the evolved consumer need, with information technology (IT) registering 25 per cent growth Y-o-Y in deal activity. Merger and acquisition (M&A) deals were a mixed bag and witnessed a sharp fall in volumes, while the year witnessed an uptick in value. M&A activities for startups were dull during the pandemic with deal volume and value dropped 27 per cent and 59 per cent, respectively. Exit transactions too fell and touched a five-year low, registering a decline of 18 per cent in volume and value.

In terms of PE funds, the launched and targeted capital recorded a five-year low of 20 per cent and 44 per cent Y-o-Y, respectively. In FY2021, 83 funds were launched that targeted a total capital of USD 5 billion. The key interest areas by top funds launched were financial services and real estate. The most active investors in these funds were Sequoia India Advisors, followed by Venture Catalysts, and LetsVenture Technologies, amongst others.

In FY2021, Startup and PE Deals saw marginal decline of 5 per cent and 6 per cent, respectively, with startups comprising 84.81 per cent of PE investments. The first half of FY2022 recorded 1,003 private equity deals worth USD 31 billion. With improved scenarios and greater domestic demand, Indian startup deals are expected to experience a steady run going ahead. H1 FY2022 started off on an excellent note where 24 startups turned unicorns, and the number of startups funded stood at 861, worth USD 17.29 billion.

PE Exits fell to a five-year low in FY2021, both in terms of volume and value. The top ten exits contributed to 58.31 per cent of the total exit value. H1 FY2022 was favourable for investors as it recorded a total of 92 deals, which represented a USD 4 billion exit value.

Merger and acquisition (M&A) lost its sheen with reduced deal activity across all categories this year. M&A deal activity declined 20 per cent by deal volume, representing a five-year low, whereas deal value grew 13 per cent. The fall in deal activity was the resultant impact of COVID-19, with key managers focusing on conserving cash. In H1 FY2022, IT topped the sectorial deal activity chart with 150 deals, followed by Consumer Discretionary with 55 deals and Healthcare with 45 deals.

Commenting on this report, Mr. Yatin Shah, Co-Founder & Joint CEO, IIFL Wealth, said, “The decade gone by has seen the Indian Private Equity/Venture Capital (PE/VC) industry come of age as it metamorphosed from a nascent alternative asset class into a mature ecosystem. During, and in the aftermath of the pandemic, companies and governments across the board have been embracing digital solutions in an attempt to meet the demands of the changed environment and stay ahead of the competition. This was reflected in VC money flows and the emergence of new, digitally-founded business models across sectors. In this report, IIFL Wealth along with its knowledge partner VCCEDGE has assessed the existing funding landscape and identified trends that can translate into areas of opportunity and growth. Such an analysis can serve value to multiple stakeholders including VC and PE firms, Ultra High Net Worth Investors(UHNI) investors, institutions, and start-ups.”

Mr. Anirudha Taparia, Joint CEO, IIFL Wealth, added, “Money flows to areas where it sees growth and an opportunity to multiply. Inarguably, home-grown Indian companies are well-positioned to cater to the changing needs of the Indian and the global diaspora and are likely to attract strong funding in the years to come. Correspondingly, the robust VC ecosystem will inevitably drive real economic value for the country and play a pivotal role in bolstering the start-up ecosystem in India. While the VC / PE ecosystem took a decade to evolve into its current form, we believe that the next leg of its growth is going to be far more explosive and accelerated. Being aware of these sharp shifts will enable ecosystem stakeholders to optimally leverage current and future opportunities.”

The India Investment Ecosystem Report 2021 is the first edition of a regular series, which IIFL Wealth in association with VCCEDGE will publish bi-annually. The data included in the report is up to September 2021.

IIFL WAM is one of the pioneers in the industry to bring about product innovations. The company was won more than 115 awards of repute since its inception in 2008, including the prestigious Best Investment Management Services and Best Innovative Technology Adoption awards for India in the Euromoney Private Banking and Wealth Management Survey 2021. At the Global Private Banking Innovation Awards 2021, it has received awards for the Most Innovative Wealth Management Service, Outstanding Estate Planning Advisory and Themed Investment Proposition.